With his knees black from the mud, American Buddy Hammon chases a soft ball. That ball has just been hit into a net by the opponents of Hammon and his teammate Clark Marshall. The net hangs 20 centimeters above the ground. The 30-year-old Hammon is athletic and fast enough not to let the ball, which shoots up from the net due to a trampoline effect, hit the ground while diving. The game continues through a volleyball-like rally. That game is roundnet and Hammon is one of the star players in the first ever world championship in Houthalen-Helchteren, Belgium.

The sport is very young: the Dutch federation for example is just three weeks old, the international federation (IRF) was founded in 2020. The road to adulthood will take a long time, but it has been started seriously. “Ultimately, the dream is to become an Olympic champion, for sure,” said Jack Scotti, the US president of the IRF.

A target year for the olympic dream to come true has not yet been set, although the first contacts with the IOC have been sought. First the game has to turn into a sport. “When people play basketball on a square in their spare time, they know that competition is also played in that sport. When roundnet is played in a park, they think it is just a game. We want to change that. It is a game and a serious sport.”

Back in 2008 sponsor and producer of the sport, Spikeball, had the first thought of becoming a sport. With a pitch at television programme Shark Tank, where investors are being convinced to put one the idea, Chris Ruder, got the attention of Shark Daymond John and of millions of viewers. Seven years later the first world championships are being organised and the game is becoming popular in Europe as well. In countries like Germany, France and Austria the playing level increases fast. And the distributor of fun sports in Europe, Brookline, says that after sales of 75.000 sets of Spikeball last year, this year all ready 70.000 sets have been sold.

To become succesfull as a sport some things need to be done. The IRF is looking to become a member of GAISF, an interntional sport fedeartion, linked tot he IOC. And countries need to found a federation, with players and clubs as members. Like The Netherlands is doing at the moment. There are about 500 players in the Netherlands, estimates Mark de Jong (33), World Cup participant and chairman of the brand new Dutch association. “We have grown in times of corona. When you were allowed to exercise with four people outside, roundnet turned out to be an ideal sport.”

De Jong now wants to get structure in the sport with a federation. Statutes and regulations have recently been made official, competitions need to be set up. “We only have three official associations, but it is played a lot in cities. I also once started by meeting up with friends via a whatsapp group to play. We don't just want to keep explaining what roundnet is at barbecues and picnics, we want to become more famous.”

For the time being, the sport relies heavily on the 'community', its own subculture, comparable to skateboarding. Roundnet is also practiced by young people (usually between the ages of 20 and 30) and in roundnet opponents are friends and sportsmanship takes precedence over rivalry. That's how it started with breakdancing and sport climbing. These are now Olympic sports and they have a large competition circuit, including a World Cup series.

Roundnet is not that far yet. Producer Spikeball is a sponsor with deep pockets that could potentially play a significant role. It will be necessary not to disappear and go back from sport to game again. At this first World Cup, for example, there was no prize money and there will probably have to be demarcated fields or real (temporary) stadiums. 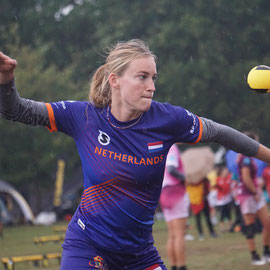 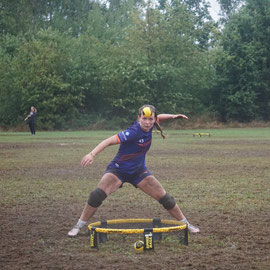 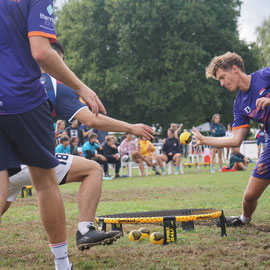 In Park Molenheide there are dozens of roundnet sets all over the field. Everywhere is played simultaneously (the net has a diameter of 90 centimetres, the net is played 360 degrees around the net, there are no alignments), enthusiasm can be seen and heard everywhere. The large German and French delegations stand out with their flags and loud cheers, but just as striking is the presence of far away countries such as Australia and Taiwan.

For Buddy Hammon, roundnet has been more than a game for some time now. He lets his emotions run wild after winning the world title. “I gave a demonstration on Shark Tank seven years ago to raise awareness of the sport and help find an investor. But I would never have thought that I now have to cry like that, because I am world champion by hitting a ball in a net!” 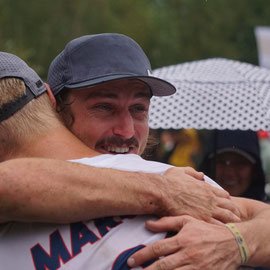 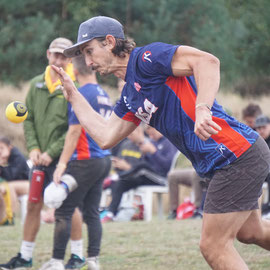 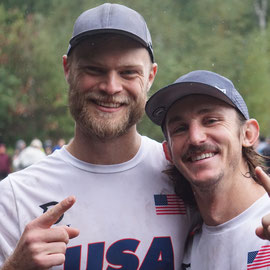