Dancing in the middle of the storm

In Charleroi, Belgium, they catch the wind. They unleash it at high speeds on the users of that wind: a group of international skydivers at the World Cup indoor skydiving. With a speed of about 300 kilometers per hour, the wind comes from below from the tunnel in the Airspace Charleroi. Ryan Christie, a Brit who lives in the Netherlands for five years, dives through the side doorway into the transparent vertical tube and the wind blows him upwards. His freestyle show begins.

He turns, he tumbles, he floats, he slides and he dances on the wind. Everything in control and coordinated.

The free fall from an airplane is an adrenaline rush in the open air for many people. For Christie, the indoor variant is a way to unwind in the midst of a storm. The roaring wind around him blows that tranquility in. “I'm more likely to produce serotonin than adrenaline,” he says with a smile. “I can really go into a meditative state, like I'm a magnet and silently draw the world into me.”

And meanwhile, Christie is in a competition, in which his exercise is judged by a jury. The freestylers, who perform their exercises to music, attract the most attention from the public at the World Cup, which is also a European Championship. When the number one in the standings, 19-year-old Kyra Poh from Singapore, is pulled into the tunnel, the fans scream and clap frantically. As a professional skydiver, Poh can be found in a wind tunnel every day. She dances in the middle of the storm: balanced, apparently weightless. “It is my mission to take the sport to a higher level, so that there is no need to make comparisons with gymnastics or figure skating or diving. It's all true, but skydiving is a sport in itself. I've been doing this since I was eight and always try to get better with a new choreography and tricks.” 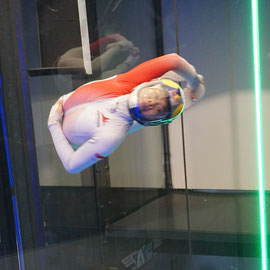 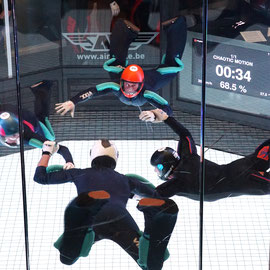 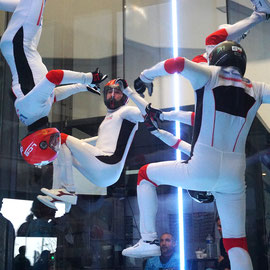 Freestyle is just one of the categories of skydiving. Sofia van der Vlist (27) and Rick Verbunt (33), involved in City Skydive Utrecht, are part of the Chaotic Motion team that competes in the formation part (FS4). The goal is to complete as many routines as possible in 35 seconds. “All movements and all exercises are known, but the order in which they should be shown is only drawn the night before the game. Then we have to determine how we are going to make transitions,” says Van der Vlist.

The order of those routines has to be in your head. And so everyone practices 'dry'. Everywhere in the building in Charleroi are tufts of turning and tossing skydivers, who visualize the exercise; tapping each other, sometimes lying on wheeled carts set up in a special rehearsal room. Once in the tunnel, where the wind speed is lower than in freestyle, there must arise an automatism of grasping, tapping and twisting that hopefully looks like a flowing dance. “Our arms and legs are the helm, with which we can steer in all directions.”

A team consists of four people, the fun is evident. After the exercise, there is often a hug with colleagues and a high five. “That is the image and the power of the sport, yes,” says Verbunt. “We also have a lot of fun, but we are also performance driven. If the helmet visor goes down in the waiting area, we're in game mode, then it has to happen. The chemistry has to be right. All the better we did well here with a stand-in.”

Within the skydive dance there are all kinds of variations that make good teams champions. The Americans of the winning Arizona Airspeed are professionals and, unlike the Dutch teams, can live off their sport. They make over 700 jumps a year and master the fast rotation to make the figures down to the last detail. The variations fly through the tunnel at an astonishing speed. Arizona Airspeed doesn't just dance in the wind, it plays with the wind. And then they just let it go again.